Addition of our new Editorial and International Advisory Board Members:

This work is licensed under a Creative Commons Attribution 4.0 International License. 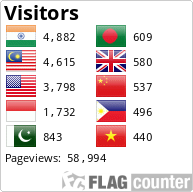